The Legacy of Agent Orange and DDT

Many people hold on-to the belief that pesticides are poisonous, and that they are harmful to humans and bad for the environment. They have come to this belief mostly through unfortunate mistakes made in the past and through generalized broad-brush thinking about a large group of chemical compounds with widely varying characteristics. Under the heading of pesticides, there are several sub-groups, and yes, some are poisonous to animals because they are meant to kill animals (rodenticides and insecticides). Others are poisonous to funguses (fungicides) or lice (pediculicides). Another grouping (biocides) includes antibiotics and antivirals routinely used in modern medicine. Herbicides kill plants by disrupting biologic processes that occur only in plants (more about that later). About the only statement that applies to all of these is that they are man-made chemicals.

In criticizing herbicides, many people have been influenced by our horrible experience in Vietnam with Agent Orange.  Containing equal parts of 2,4-D and 2,4,5-T, Agent Orange was used to defoliate the jungles to expose Viet Cong troop movement. Many veterans in the U.S. and many more residents of southeast Asia  became sick after the war with illnesses ranging from several types of cancer to various respiratory diseases. After years of inquiries, it was learned that the 2,4,5-T in Agent Orange was contaminated with dioxin, a potent and known carcinogen, as a byproduct of the manufacturing process. Consequently, the production of 2,4,5-T has been banned by the US and numerous other countries. For a detailed discussion of this subject, see http://www.nap.edu/catalog/11242.html#orgs. Over 20 million gallons of herbicides (there we others besides Agent Orange) were spread in Southeast Asia between 1962 and 1972 and we can only speculate at the high concentrations that were probably used during a war-time action. Many soldiers on the ground must have had very high rates of exposure and the persistent nature of dioxin has affected many non-combatants in southeast Asia in the years since the war ended.

DDT is an insecticide that was used heavily during WWII and as late as the early 1970s. The chemical is fat soluble and because of this it bio-accumulates in food chains. This means that the animals at the top of the food chain (including us) get the highest doses. DDT takes more than 15 years to break down in the environment, is a probable human carcinogen and can damage many parts of the human body. It also pushed the Bald Eagle to the brink of extinction. It is really bad stuff and its use was banned in the U.S. in 1972. It's important to note that DDT is an insecticide, not an herbicide.

Dioxins and DDT are included on the EPAs "Dirty Dozen" list of banned Persistent Organic Pollutants (POPs). Many POPs were widely used during the boom in industrial production after World War II, when thousands of synthetic chemicals were introduced into commercial use. Many of these chemicals proved beneficial in pest and disease control, crop production, and industry, but had unforeseen effects on human health and the environment. Their use has been reduced or eliminated through a United Nations treaty agreed to by the U.S. and 90 other countries. For more on this go to http://www.epa.gov/oia/toxics/pop.html#stockholm.
Posted by Ken Thacker at 11:52 AM No comments:

No discussion of invasive perennial weeds would be complete without a few words about the 'lowly' dandelion. It's what most folks think of when someone says "weeds" and is no doubt the most widely spread/recognized/hated invasive plant in the U.S. I'd also guess that more money and time are spent trying to control dandelions than any other weed species, noxious or otherwise. Dandelions belong in this part of the overall discussion because, contrary to conventional wisdom, it is a perennial plant. Once established, mature dandelion plants have large tap roots that survive winters as well as most human efforts to control the pesky plants. Almost all dandelion control is done for aesthetic reasons in lawns and turf, since the plants do provide forage for livestock and browsing/grazing wildlife. Since nearly all parts of the dandelion plant are useful as food or medicines, it was probably brought to North America by the earliest European settlers.

Non-Chemical: 1-Mow often to keep the flowers from producing seed and hope your neighbors do it too.  2-dig or pull the plants with one of the many inventions specifically designed for this (you must get nearly all of the root)
3-heavy mulching followed by replanting of the non-target vegetation that is also killed
4-boiling water, agricultural vinegar and flaming torches will kill the tops of the plants making them effective only on young dandelions. Older plants will sprout back from the roots. These methods also kill other plants that are sprayed or burned.

Chemical: 2,4-D was invented for Dandelions. All the various commercially available "lawn herbicides" contain 2,4-D and many also contain small amounts of more serious herbicides such as dicamba or triclopyr to broaden their spectrum of species controlled. Look for "Foundation" or "Triplet" or "Trimec" but be careful not to over-apply these.

New: 1-'Serritor' fungus that kills broad leaf plants only and then "disappears". This may not be available in the US yet.
2-'Fiesta' or 'Iron-X' use chelated iron to give "dandelion, clover and plantain" a lethal dose of iron. This is available at the Sandpoint Co-op as Whitney Farms "Lawn Weed Killer", AND IT SEEMS TO WORK, but only for dandelions. I sprayed a test plot that has grasses and several weed species and it took out the dandelions, but nothing else.This is good news because it won't kill your lawn grasses. However, it remains to be seen if it also killed those deep dandelion tap roots. It comes only in pre-mixed quarts and is expensive on a per acre basis, but for those scattered dandelions it may be the ticket if you want to avoid herbicides.
Posted by Ken Thacker at 8:20 PM No comments: 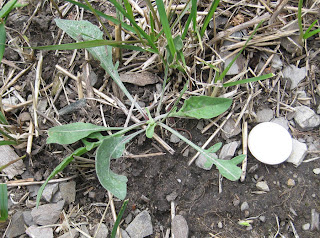 First some personal observations about some of the universal truths of weed control.

1. "Control" usually doesn't mean eradication. Total removal of a localized weed infestation is possible in many situations, but usually not. However, thinking "eradication" during weed control work is good for the soul.

2. Any method, or methods, of weed control of invasive, difficult to control weeds must be applied repeatedly over a number of years. No single treatment will totally eliminate any of these bad guys. If the correct methods are being used, the job will get smaller each year.

3. To be effective, weed control must eliminate seed production EVERY year.

4. Relying totally on one control method is usually much less effective.

5. For many of the widespread weeds, biological control is the only real hope for region-wide control.

6. Not all weeds are widely spread by the wind or wildlife. This means that it isn't always your neighbors fault.

7. Roundup (glyphosate) is almost never the best choice of herbicide to use for chemical weed control. It also kills the plants needed to compete with weeds.The photo is a young knapweed seedling at a very fragile stage of life. 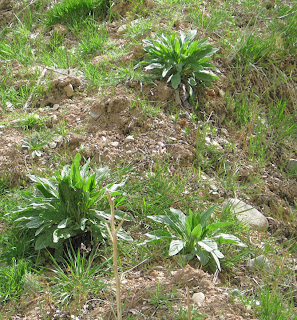 This subset of the plant world includes several of Idaho's noxious and other invasive weeds. As you can probably tell from the name, biennial plants are those which usually live for two years between the time their seeds germinate and when they produce seed and die. During their first growing season, biennials remain in a low growing "rosette" form and put most of their energy into developing a large root system. In their second year they take advantage of the large root system to "bolt" and produce a flower stalk that, if left alone, produces hundreds or thousands of seeds that can be widely spread. About the only good news about this group is that you generally have two years to get them before they produce seed. As with the annual weeds, biennials rely entirely on seed production for reproduction, so stopping seed production is the key to control. Also like the annual weeds, "stopping seed production" is easy to say, but very difficult because of the various adaptions these plants have for survival. In northern Idaho this group includes the noxious weeds houndstongue (aka the velcro plant), tansy ragwort (this is not common tansy) and Scotch thistle and the obnoxious weed burdock (another velcro plant). I know that burdock is in the City of Sandpoint. Burdock and houndstongue both produce seeds that are known to most anyone who owns pets or livestock or spends time outdoors. These both spread by attaching to any critter that brushes against it, including us, so for both of these we have met the enemy and he is us.

Control: There is a little more good news hidden here and in the Annual Weed post. Both of these groups of weeds can be effectively controlled in yards and other small areas by simply pulling them up or cutting them off at the root or tilling them under, AND, (the kicker) keeping at it for years, BEFORE THEY PRODUCE SEED. Anything done after seed production with any of these weeds is only improving appearances, because the seeds are all ready on the ground. However, with vigilance and persistent effort you can expect to eliminate these from your yards. The story is a little different for perennial weeds, which will be talked about in the next post. Stay tuned and remember: don't let them go to flower. This pic shows early season houndstongue 'rosettes'. They are the most robust plant out there early in the spring.